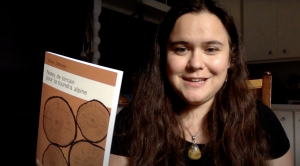 It was with great pride and joy that the LTAC , during the November 26 premiere of the 2021 Glassco Gala, revealed Luba Markovskaia’s Notes de terrain pour la toundra alpine as the 37th winner of the John Glassco Translation Prize.

This year, we received French and English translations from French, English and Spanish. The genres covered were fiction, non-fiction, and poetry.

With Notes de terrain pour la toundra alpine (French version of Field Notes for the Alpine Tundra by Elena Johnson), Luba Markovskaia has produced a translation that is at once learned, original and singular. The presence of an extensive paratextual apparatus – introduction, interview with the poetess, chronology – radically transforms the book as an object. Thus, this French translation offers, in a sense, a brand-new book, enhanced by a series of interventions from the translator which, on the one hand, enlighten our reading of the poems, and on the other, underline the importance of the translator’s active work in the dissemination, interpretation and reception of the work. The jury was also impressed by the work on sound and by a certain harshness of language, a reflection of the harshness of the original text, which in turn reflects the harshness of the Yukon landscapes represented in the collection. Markovskaia’s translation implores us to follow her work closely, both in her future translation choices and in her thinking about translation and literature.

The selection jury was presided by professor and LTAC executive Arianne Des Rochers, an accomplished translator and scholar who was shortlisted for a Governor General award in 2020.

Looking for a literary translator? Check out our directory!

Get to know our members

ATTLC/LTAC stands in solidarity with author NourbeSe Philip’s call for the Italian publisher Benway Series to destroy the Italian [...]

LTAC presents: A Conversation with NourbeSe Philip on the unauthorized Italian translation of Zong!

The LTAC is proud to present a conversation between the poet NourbeSe Philip and translator Elena Basile on the [...]

It is with great pleasure that the Literary Translators’ Association of Canada extends an open invitation to virtually attend the 37th John Glassco Translation [...]

Winter Trad / Transe hivernale is right around the corner! As part of the Salon du livre de Montréal [...]

Roundtable: How Might US, Canadian, and Mexican Literary Translation Associations Collaborate?

The Literary Translators' Association of Canada has had the great privilege, these past years, of strengthening its partnership with [...]

Tune into our Facebook page at 3pm next Monday (th

LTAC is pleased to co-sponsor, with @westernulangu

Our next Here is Elsewhere event is scheduled for

Our next Here is Elsewhere event, featuring Ray El

Great stuff from @minab.an.african.person. Link in

Join us this Friday, February 19th at 7pm EST for

We’re thrilled to be partnering with @partoutlap