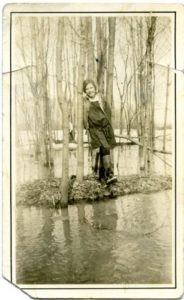 We learned with shock last April that one of our founding members who was also an honorary member died in September 2005. Joyce Marshall was a distinguished writer and translator who was born and lived in Montreal until the 1930s when she moved to Toronto.

As a translator, she is best known for her translations of three books by Gabrielle Roy, The Road Past Altamont (la route d’Altamont), Windflower (La rivière sans repos), and Enchanted Summer (Cet été qui chantait). For the third of these, she won the Canada Council Prize for Translation (which later became the Governor General’s Award for Translation). Especially notable also is Word from New France, 17th Century letters of Marie de l’Incarnation, which Joyce edited as well as translated.

She wrote two early novels, Presently Tomorrow and Lovers and Strangers, both to considerable critical acclaim, and many short stories which were read over radio and published in magazines, anthologies, and three collections, including the bilingual Blood and Bone / En chair et en os, which was organized, edited, and foreworded by colleagues, members of LTAC / ATTLC, and in which her stories are translated by seven more colleague-members. For many years she was a close collaborator with the legendary Bob Weaver of the CBC Anthology program.

Joyce and I met through the Stanley House Conference organized by Phil Stratford in 1974, which gave rise to the founding of LTAC / ATTLC. She was vice-president of the Association in its early years when I was president. She spearheaded the battle for recognition during those years, writing innumerable letters to review critics who failed to mention translators. The two of us together took on a leading publisher who was convinced of a fundamental conflict between translation accuracy and readability and insisted that translators were so wedded to accuracy (which, to him, meant unreadability) that only editors, bilingual or not, could be trusted to make final editorial decisions.

I developed a warm personal friendship with Joyce through working with her. She had a keen and observant wit and was unfailingly sensitive and generous. She always stayed with me when she came to Montreal and during those years I always stayed with her when I went to Toronto. I learned a great deal from her, about translation and about other aspects of life, for which I shall always be grateful.

Why none of us knew when or why Joyce died, or even that she was seriously ill, is a source of shame to me and mystery to all of us who knew her. She had suffered severely from arthritis latterly and had become very reclusive and difficult to communicate with. She had quarrelled with and left The Writers’ Union years ago, unfortunately narrowing her ongoing source of contact with others of similar interests. Since she was an honorary member of LTAC/ATTLC, she received association mailings (she did not have email) but there were no necessary communications from her. I can only say that I am deeply saddened by her death, but even more by indications that she reached a point where she did not want to communicate with anyone but one or two friends or relatives and simply wished to fade away.

Cloutier, Eugène, No Passport: A Discovery of Canada, Toronto: Oxford, 1968.